US Open Cup 3rd Round

When I got to LIVESTRONG Sporting Park, I was given photo bib #9 (we have to wear these green things to make sure people know, if they didn't see our credentials, that we can be on the field). I remarked at the time, "Maybe this means that Teal Bunbury (#9) will score tonight?" In the third minute, Teal Bunbury did in fact score. Good thing I bought lottery tickets before the game too. I also got a good pic of Teal that I will be giving to Wikipedia, since his page doesn't have one.

Eric Kronberg stopped the only shot Chicago put on net (they had 5 shots total) with Milos Stojcev and Kei Kamara scoring in the 2nd half for a final tally of 3-0. This puts Sporting KC into the quarterfinals of the US Open Cup and they will host the Richmond Kickers, who defeated the Columbus Crew 2-1. The game will be played at LIVESTRONG Sporting Park on Tuesday, July 12th at 7:30pm. This means the team has 6 home dates in July, including the international friendly with Newcastle United on July 20th.

Across all competitions, Sporting KC is now on a 9-game unbeaten streak with wins in 4 of their last 5 matches. Kronberg has not yet allowed a goal in 3 Open Cup matches. Chicago came close, but the one time they did get the ball into the net, it was ruled out for offside.

The team is playing fairly well, even though they did have a lull for most of the first half after Bunbury's goal. As Peter Vermes said after the game, he'd warned them about not taking this game seriously enough in the lead-up to it and was even more forceful during halftime because they didn't seem to be keeping that warning in mind. They had several chances to extend their lead in the first half, but they just didn't seem to be able to capitalize.

But the main thing is that they're into the quarterfinals of the Open Cup, the winner of which gets an entry into the CONCACAF Champions League for 2012. Vermes made it clear after the match that he feels that this team has as good a chance as any team that's still left in the competition and whenever you have a chance to win silverware for the club, you need to take it. Maybe this means the team will make a concerted effort to win the tournament and hope that their form also extends to league play. With 14 of their last 19 at home (plus any additional home dates for Open Cup play), Sporting KC has an incredible opportunity to make a run at a playoff spot and possibly pull off the double (Open Cup and MLS Cup). I'm not saying they will, but it's a possibility.

Just a few thoughts right now after the 2-1 Sporting KC win at LIVESTRONG Sporting Park tonight... Should have pics later.

1) The team continues to play well. The unbeaten streak has reached 7 games (8, if you count the Open Cup win over New England). They've jumped from 9th all the way up to 6th, putting Chicago, New England and Toronto in the rear view mirror. They are now 3 points out of a playoff spot (top 3 qualify with 4th and 5th playing a play-in game), with 11 of the next 13 and 14 of our last 19 at home. The rough start to the season will be something to laugh at later if we can continue our good form at home and qualify for the playoffs.

2) The United States Soccer Federation needs to fire Bob Bradley. The team's performance over the last 6 or 7 matches has been inconsistent at best. Losing to Panama and Paraguay is inexcusable. I haven't watched tonight's game yet, but I have a feeling that when I do, I'm going to want to throw things at the television.

3) I will be referring to the leadership of MLS as asshats from now on. Why? Quite simply because they claim they want the sport to grow in this country, but they scheduled league games at the same time as national team games. If you want the sport to grow, don't make it compete against itself. You would think that would be a pretty simple concept to grasp, but that's what you get for thinking.

4) Omar Bravo seems to be coming into pretty good form. After his hernia injury, what he calls the first real injury of his career, he seems to be getting back to the form he had while at Chivas Guadalajara.

5) After the game, I asked a few people if what happened to the Galaxy today (starting keeper injured, backup gets sent off) had happened to us, who would be in net... I had a couple people say Kei Kamara (including Kei), but when I asked Jimmy Nielsen, he said Roger Espinoza. When I commented that a couple people had said Kei, he said he'd still rather have Roger. Personally, nothing against Roger, but I think I'd rather have Kei. He's taller and athletic (not that Roger's not athletic).

6) On Tuesday, Sporting KC needs to plow Chicago Fire PDL into the ground. Peter Vermes said after the game tonight that they team wants to win the tournament. If that's true, they need to destroy Chicago. Doing that will accomplish two things: 1) Send a message saying the team's serious about the Cup; 2) Continue the team's good form at home. The quarterfinal hosts have also been announced. If Sporting KC wins Tuesday, they will also host the quarterfinal match against the winner of the Columbus Crew-Richmond Kickers match, currently set for July 12th.

I think I'm just now coming down off the natural high of having attended a USMNT game. Last night's match at LIVESTRONG Sporting Park was nothing short of magical. Not necessarily the way the team played (well enough, but not as good as they're capable of), but just the atmosphere and the fact that I didn't have to drive 12-14 hours or hop on a plane to get there. This is one of the reasons the stadium was built, to host national team games, and it was just like I'd imagined it.

To the photos... Just some of my faves for the night... I'll post some from Panama-Canada later... 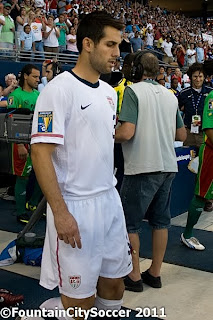 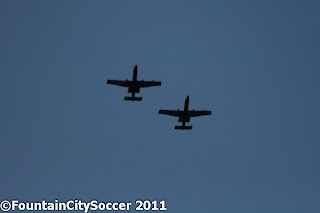 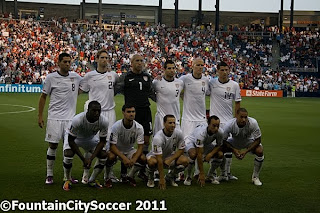 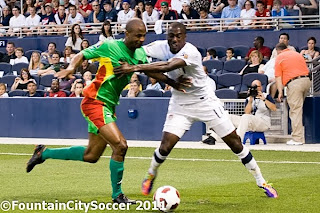 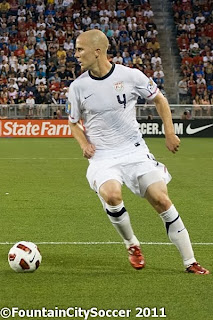 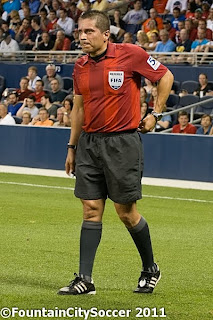 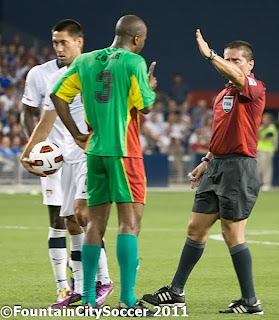 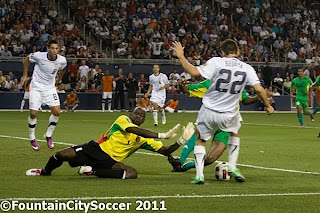 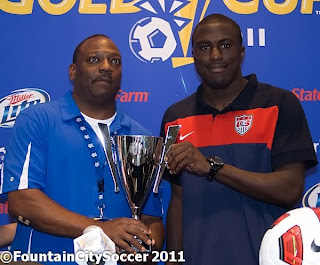 I think I'm going to post any photos I have of tonight's game against Chicago later... I'm simply just too incredibly pissed off. I have never been so disappointed in the Cauldron's behavior.

I can understand being upset about the non-call on the absolutely obvious penalty involving Omar Bravo. It made me think that Michael Kennedy still hates the team formerly known as the Wizards. Little Napoleon seriously needs to pull his head out of his ass.

That still does not excuse the deplorable behavior from the Cauldron. Boo, sure. Carpet bomb the field with F-bombs, okay. Start the Who's Your Daddy chant, fine. But DO NOT start throwing stuff on the field. There is absolutely no reason for beers and other liquids to come flying out of the stands. I was sitting on a stool in front of the Cauldron and if one of those drinks had hit my camera and fried it, I would have been needing the security or police to hold me back to keep me from shoving my monopod where the sun doesn't shine. My camera is expensive and I don't have the money to replace it, so if you break it, you'll be buying me a new one.

It's bush league bullcrap and we, as a fanbase, need to be better than that.
Posted by Alan T Hainkel at 12:28 AM 3 comments:

This is the first of several posts that will be made from LIVESTRONG Sporting Park. I'm here for Media Day and now, I think, it's starting to feel real. This stadium really does belong to us. It truly is the palace that this sport generally, and this team specifically, deserves. There's room for 18,467 soccer fans to make this stadium the best place in MLS to watch a game. There are 300 HDTV screens around the stadium, even in the bathrooms, so you don't have to miss a second. And there will be mobile apps that will connect fans to the game in ways they've probably never even imagined before.

One of the largest HD video boards in the US on the south end of the stadium... 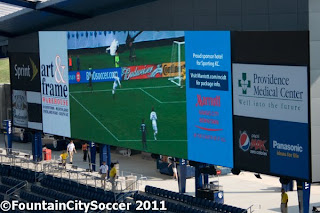 The LIVESTRONG Seat just outside the owner's suite. It will be used like the Buck O'Neil Legacy Seat at Kauffman Stadium to honor cancer survivors and activists who do a lot to raise awareness and/or money for research... 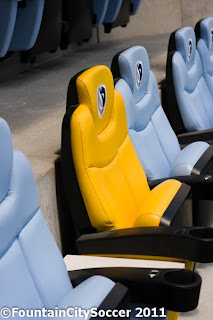 With a great stadium you need to have good food to go along with it. This is the Bacon-Wrapped Hot Dog. If you don't like this, you don't like food... 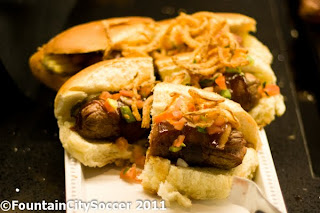 The Sporting KC locker room is pretty sweet. The chairs have USB connections so they can charge their iPod, iPad or iPhone and there are two power outlets in the floor by each chair. Figureas manufactured the chairs in Spain at a cost of approximately $5k each. 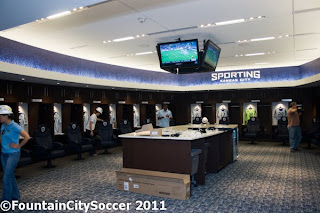 A closeup of Teal Bunbury's locker. No, Teal did not put the magazine there for the photo. He hadn't seen his locker yet when we walked in. 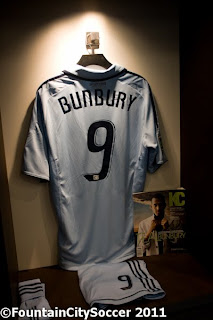 That's it for now. See you soon.
Posted by Alan T Hainkel at 5:01 PM No comments: